Home » About us » Enrico Credendino 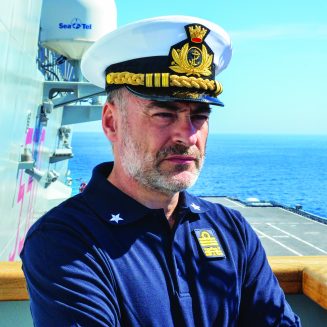 Admiral CREDENDINO was born on the 21st January 1963 in Turin. He joined the Italian Naval Academy in 1980 and was commissioned as an Ensign in 1984.
He undertook tours on board the cruiser VITTORIO VENETO, the cruiser ANDREA DORIA and the guided missile destroyer ARDITO, as gunnery, missile systems and as operations officer respectively. He later commanded the patrol vessel SPICA, the frigate MAESTRALE, the 1st Patrollers Squadron, whilst also acting as Command Training School’s Evaluation Officer, and subsequently the guided missile destroyer FRANCESCO MIMBELLI.
The Admiral’s ashore commitments included duties as: Commander of Cadets at the Italian Naval Academy; Staff Officer of the Plans and Policy Department of the Italian Navy General Staff – Naval Policy Office; Director of the Cadet Courses of the Italian Naval Academy; Chief of the Alliance Policy Office at the Plans and Policy Department of the Defense General Staff; Deputy Chief of the Plans and Policy Department of the Italian Navy General Staff.
Upon promotion to Rear Admiral (LH) on the 1st of July 2011, he was appointed Deputy Commander of Italian Front Line Naval Forces and Deputy Commander of NATO Italian Maritime Forces, Commander of Spanish/Italian Amphibious Force and Commander of Italian Naval Task Group. Between August and December 2012 he was appointed as Force Commander at European Naval Forces for the counter-piracy mission EUNAVFOR ATALANTA. From September 2013 he was Head of Plans and Policy Department in the Italian Navy General Staff, and was promoted to Rear Admiral (UH) on 1st July 2014.
Since May 18th, 2015 he has been appointed as Commander for EUNAVFOR MED operation SOPHIA.
In 1998 he attended the 2nd Advanced Command and Staff Course in the United Kingdom and in 2007 he attended the 59th course at the “High Studies for Defense Centre” in Rome.
The Admiral also obtained a summa cum laude degree certificate in Maritime and Naval Sciences at the University of Pisa, a degree certificate in Political Science at the University of Trieste and a 2nd level certificate in Security Advanced Studies at the University of Perugia. He speaks fluent English and he has a good knowledge of the French language.
On the 1st of January 2019 he was promoted to Vice Admiral.