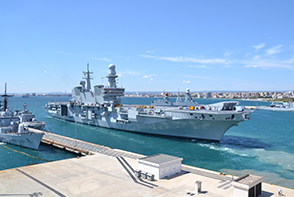 On 27 June 2015, Italian Navy Ship, ITS Cavour, after the departure from the harbour of Taranto reached the area of operation in the southern part of the central Mediterranean sea to start the actions of the first phase of the mission together with other units belonging to participating member States.

EUNAVFOR MED will be conducted in sequential phases, in full compliance with international law, including humanitarian and refugee law and human rights. The EU Council decision enables the start of the operations first phase, which focuses on surveillance and assessment of human smuggling and trafficking networks.

On board the Force Commander, Rear Admiral (Lower Half) Andrea Gueglio (IT Navy),  and more than 600 military personnel.

In the next following days other units from other member states will join the naval group.

ITS Cavour is the flag ship for the mission due to its Command and Control skills for joint and international operations. The Command Center of the ship has full capability to host the more than 100 multinational members of the Force Headquarters Staff and of specialized enablers Teams.

EUNAVFOR MED is one element of a broader EU comprehensive approach to migration which aims to respond to the immediate need to save lives and address emergency situations, tackle the root causes of irregular migration and fight traffickers.