Rear Admiral Jean-Michel Martinet was born on the 1st of September 1966 in Castelnaudary, France. He is married to Isabelle and has three daughters.
On completion of his postgraduate degree in economic sciences in 1989, he was appointed to French Naval Forces in the “intelligence/ international relations” field.
In this specialization, he was assigned to several posts in Joint Staff, Navy and Overseas Staffs during ten years.
At sea in 2000 he was Executive Officer of the corvette “COMMANDANT BIROT”, during several operational deployments. In 2002 he served as the Deputy Personnel Officer and Navigation Officer of the frigate “JEAN DE VIENNE”, participating in anti-terrorism and smuggling/illicit traffic interdiction operations in the Mediterranean. In 2009 he was Executive Officer of the amphibious assault ship “SIROCO”. In this role he conducted two CORYMBE (African stability mission) deployments and participated in the humanitarian operation “Séisme Haïti 2010” (Haiti earthquake relief). He commanded on three occasions: the supply and transport ship “BOUGAINVILLE”, taking part in operation LICORNE in the Ivory Coast region during the 2004 crisis, in 2006 the intelligence collections ship “DUPUY DE LOME” conducting sea trials and its first operational mission, and in 2011 the amphibious assault ship “FOUDRE”, deploying to support the CORYMBE mission.
He has a large experience in operational staff. In 2012 he was appointed to French Maritime Forces Command (FRMARFOR) as chief of staff of the Combined Amphibious Task Force (CATF). From April to July 2013 he was the CTF150 Commander during the French command mandate of this multinational force, fighting against terrorism in Indian Ocean. Then in 2015 he became chief of staff of the French Maritime Command Component (MCC).
From January 2016, commodore, he was deputy of the Admiral commanding Naval action Force for the command of ships based in Toulon.
Graduated from the Joint War College in Paris in 2004, Radm Jean-Michel Martinet personal awards include Officer of Legion of Honor and National Merit Order, knight of Maritime Merit, Order, holder of the Combatant Cross, the National Defense Gold Medal with a commendation in the Navy Order, the National Defense Silver Medal, the Nation’s Recognition Medal, the Overseas Medal” for Ivory Coast operations, the “Commemorative Medal” for Former Yugoslavia, Afghanistan and Haiti operations. 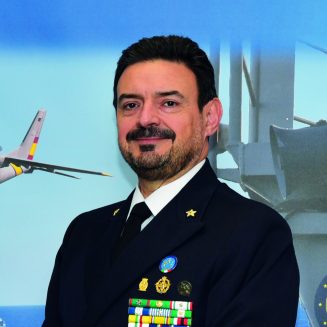